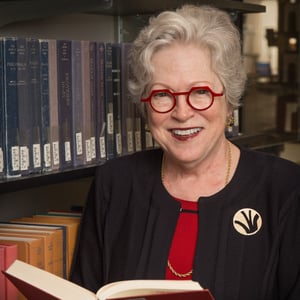 (ST. PAUL, MINN., January 20, 2022) – The Board of Trustees of United Theological Seminary of the Twin Cities this week unanimously selected Rev. Dr. Molly T. Marshall as its president. Previously serving a one-year term as interim president, Marshall began her new role effective January 19, a term of up to three years, to continue the progress the school has experienced under her leadership.

“Rev. Dr. Molly Marshall is an effective leader among leaders,” said Rev. Dr. Frank Yamada, executive director of the Association of Theological Schools (ATS). “She has a proven track record of moving theological schools into areas of thriving. This is incredible news for United Theological Seminary of the Twin Cities and for the church. Her leadership is a hopeful sign for United’s next chapter of living into its mission.”

A passionate advocate for theological education, Rev. Dr. Marshall has brought her skills to United as a strategic administrative visionary, academic scholar, effective minister and teacher, and builder of relationships and community since she began as interim president on March 1, 2021. Since then, the school has experienced a transformative season, including growing enrollment; an increase in the number of financial gifts; a renewed strategic plan; a new endowed chair in World Religions and Intercultural Studies; and a $1 million grant from Lilly Endowment Inc. to establish a leading-edge Leadership Center for Social Justice, equipping cohorts of pastors to move social justice to the center of congregational life.

“Over the last year, with the presence and good work of Rev. Dr. Molly T. Marshall as interim president, United has embarked on a promising new future,” said David Anderson, chair of the United Board of Trustees. “There is still much to be done and Rev. Dr. Marshall is, no doubt, the person for such a time as this. For that reason, the Board of Trustees has exercised its option to renew and extend Rev. Dr. Marshall’s tenure, reviewed annually over the next three years. With these commitments secured, she is no longer ‘interim’ – she is now president. The Board of Trustees thanks President Marshall for her willingness to partner in this work. I personally thank President Marshall for her friendship this year and look forward to continuing the journey we have so auspiciously begun.”

“United is experiencing a season of renewal, some have even called it resurrection. I give thanks for the privilege of leadership at this time as I support the work of gifted faculty, staff, and students,” said President Molly T. Marshall. “I am grateful to the Board of Trustees for its confidence and affirmation, and I will endeavor to make this term of office a productive time as the seminary strives to make the world more just. There was never a greater need for a seminary like United, and I am committed to its flourishing!”

Holding credentials in the American Baptist Churches, Marshall has shown her commitment to the rich tradition of United and its founding denomination, the United Church of Christ (UCC). In September 2021, she received dual standing with the Minnesota Conference UCC after deep study, written reflection, and an interview about the theology, ecclesiology, and sacraments of the UCC.